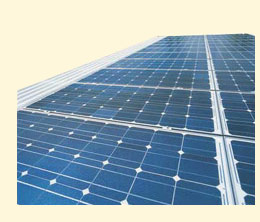 Active solar technologies can be used to generate electricity and hot water.  The first generation for the production of electricity consist of silicon-wafer solar cells.  These are associated with high cost-to-performance ratios.  In the 1990’s a new production method called “thin film” developed the technology to produce thinner and less costly solar cells, but were also less efficient that the first generation cells.  The third generation of solar cell development, lead by Nanosolar, promises to lower the cost and increase efficiency through a printing process on a low cost foil.  The potential with this new technology will allow roofs to be covered with this printed film to produce electricity.  Nanosolar is currently focusing on municipal solar power plants, but are reassuring that they do have a residential solution in their near-term roadmap.

New discoveries from an MIT scientist, Daniel Nocera, could overcome the greatest obstacle to the widespread use of photovoltaics, which is the storing of the energy produced.  Similar to the photosynthesis performed by plants, he and his team have developed a new catalyst that produces oxygen from water, and another catalyst for producing hydrogen gas. The oxygen and hydrogen can later be combined inside a fuel cell, all at room temperature- producing clean electricity day and night.  The Solar Revolution Project has been created to fund and drive this initiative with a goal of 10 years for large scale deployment.

These house plans only address active solar by providing south facing roof area as a structure to install photovoltaics, and do not specify products as such.  The potential is within sight to realistically live in homes off the grid, as well as power your car from your own home.  My goal is to provide house plans that utilize solar radiation to augment the homes heating needs, as well as provide a healthy space to live.  Later, by incorporating these new advances in solar technology these homes can be retrofitted to become grid independent.